The Diabetes Fire Triangle and How Many Carbs You Can Eat 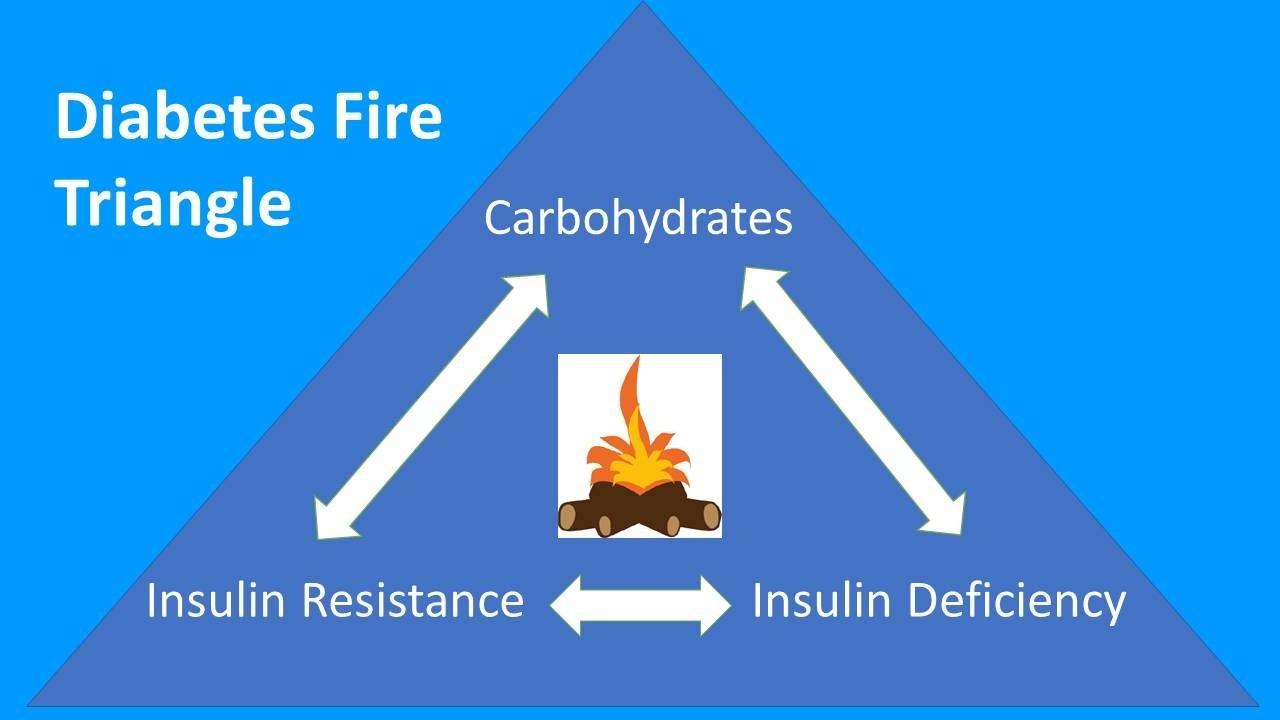 The Diabetes Fire Triangle and How Many Carbs You Can Eat

Jane was not surprised to hear those words. Many people in her family already have diabetes, including both her parents. She’d been thinking she needed to make some changes in her life for a few years, but she never quite got around to it, and the few things she tried never really stuck as new habits. She took a deep breath and sighed.

With her new diagnosis, Jane knew she couldn’t put off her health any longer. She had 2 daughters she loved, and it was her dream to enjoy grandchildren someday. Plus, she and her husband had been saving for retirement and hoped to travel more. She didn’t want poor health to get in the way of her dreams.

But Jane was confused. She’d been reading about nutrition, and recommendations were all over the map. Some say anything with carbs is bad. Others say lots of plants and no oils. Others say moderation. It made sense to her to cut down on added sugar. But what about fruit? Fruit is healthy, right? Or how about sweet potato? She’d read about how the Okinawans often lived to be 100 and ate a diet with a type of sweet potato as a staple. But sweet potatoes have carbs, so can they be healthy?

She’d grown up in an Italian family, and bread and pasta were two of her favorite foods. Did she really have to give these up forever?

Jane really wanted to know what to do to be healthy.

We’re going to look at what causes type 2 diabetes and what Jane can do, but before we get there let’s cover a couple basics about glucose and insulin, just to be sure we’re on the same page. Some key points:

Remember way back in science class when you learned about the fire triangle? You learned fire needs 3 things to be able to burn – oxygen, fuel, and heat. Take one away, and the fire goes out.

You can think of diabetes needing a “diabetes fire triangle” to occur. Three components are needed for diabetes to develop and your blood sugar to go high – insulin resistance, insulin deficiency, and carbohydrates. Take one component away, and high blood sugar goes away. 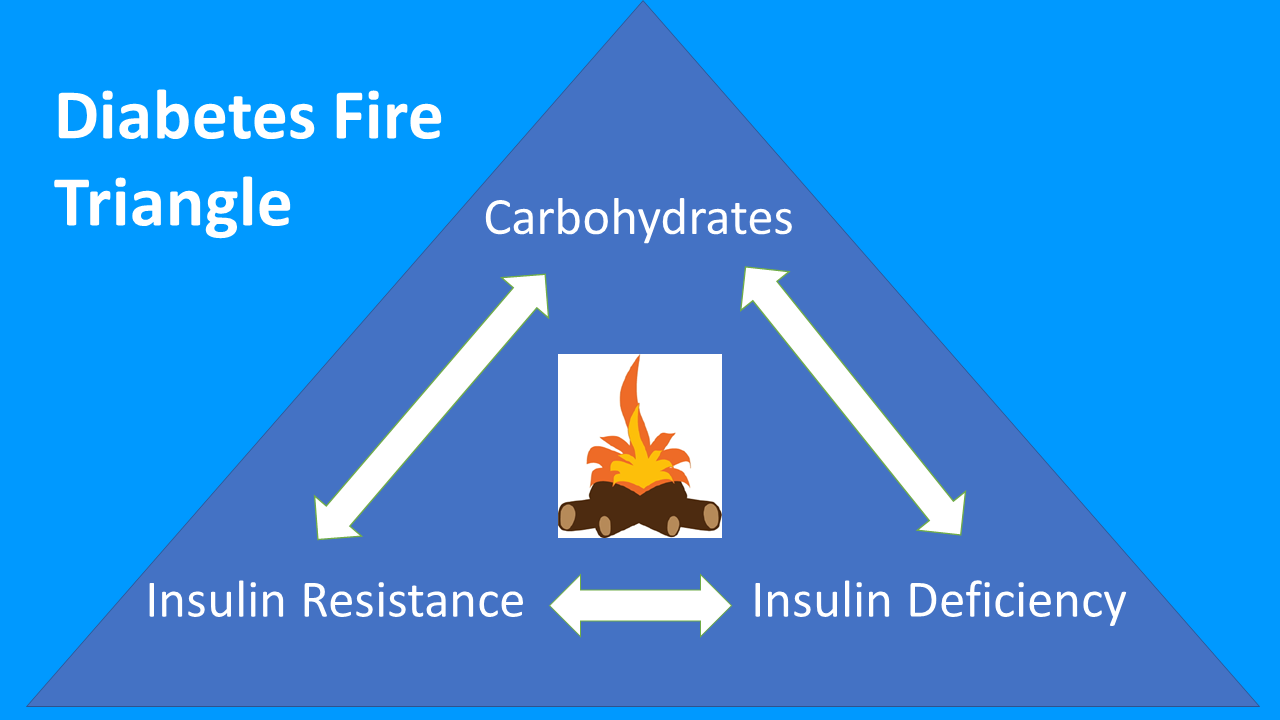 Let’s look at each of these factors briefly.

Insulin resistance occurs when your cells – liver cells, muscle cells, fat cells – don’t respond normally to an insulin signal. Insulin is present, but your cells don’t sense the insulin signal and remove the glucose from the blood. Risk factors for insulin resistance include becoming overweight, sedentary lifestyle, getting older, certain medications like steroids, and genetics.

Insulin deficiency implies that the pancreas cannot produce enough insulin to overcome the insulin resistance. Insulin levels do not have to be low, just insufficient. In a simple way, if your cells are half as sensitive to insulin but your pancreas can produce twice as much, everything will balance out and your blood glucose will remain normal. But if your pancreas is only producing 1.5 times as much insulin in this circumstance, diabetes develops. Insulin deficiency increases the longer you have diabetes. Just as when you drive a car at 4000 rpm all the time the engine wears out, when insulin resistance forces your pancreas to work extra hard to produce insulin, the pancreas is eventually unable to keep up and insulin production falls.

Carbohydrates are the starches and sugars that your body metabolizes to supply glucose to your cells. Foods higher in carbs include grains, rice, dairy, fruits, and certain vegetables (especially the ones that grow below ground). If you have diabetes, changing carbohydrate intake is the fastest way to change your blood sugar, just as you can make the fire burn higher by adding more fuel or make it go out when you stop adding fuel.

All 3 of these factors need to come together in the right combination for diabetes to develop. Diabetes treatment can be directed at any one of these factors, and ideally will address all three.

Goals for Every Healthy Diet Plan

What is the best diet for diabetes? I get asked this question more than just about any other. Let’s start with some principles, then we’ll come back to the diabetes fire triangle for recommendations about treatment.

When considering a diet, we can say every healthy nutrition plan needs to accomplish 4 goals:

Any diet that doesn’t do all 4 of these will not serve you well over the long term. Many programs ultimately fail because they don’t accomplish all four of these goals. The healthiest plan in the world is no good for you if you can’t follow it over the long term.

The typical diet in the US, the “Standard American Diet,” is not healthy. It contains too many added sugars, highly processed foods, and refined carbohydrates.  Look at estimates of daily calorie intake for the average American in the chart below, noticing calories from grain products, added fats and oils, and caloric sweeteners add up to 1600 calories per day. Most of these calories come with relatively little nutritional value, and the added sugars and processed foods create stress in the body that contribute to its malfunction. 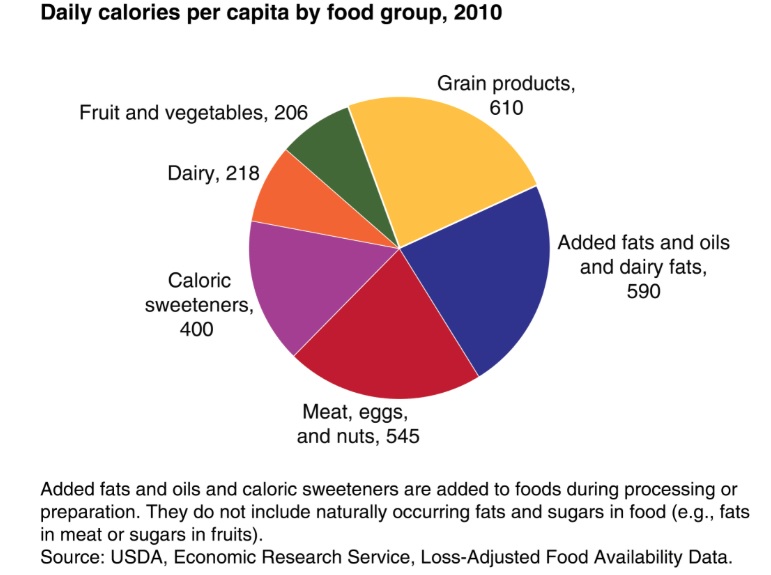 When considering the best diet for diabetes, realize that simply moving away from the Standard American Diet, in almost any direction, can be beneficial. Healthy diets all generally focus on increasing plant intake (vegetables and potentially fruits) and decreasing added sugars, refined grains, and highly processed foods.

Treatment for diabetes ideally will address all the components of the diabetes fire triangle. There is a lot of controversy and confusion about carbohydrate intake, so let’s start there.

Low-carbohydrate diets are the fastest way to reduce blood sugar without medication. Just like taking fuel away from a fire kills the fire, taking carbohydrates away from the diet reduces blood sugar levels. Most people are very well served by reducing carbohydrate intake to 50 g per day or less when diagnosed with diabetes. However, many people find it difficult to sustain this degree of carbohydrate restriction.

Also realize that all carbohydrates are not equal. There are good carbs and there are bad carbs. Generally, intake of vegetables, fruits, and whole grains has been associated with lower risk of health problems while intake of refined carbohydrates (things made from white flour, for example) and added sugars is associated with increased health risk.

So while a more substantial decrease in carbohydrates initially can help to decrease blood sugar rapidly, once insulin resistance and insulin deficiency are treated, many people find they can successfully incorporate a greater amount of healthy carbohydrates back into the diet if desired.

Insulin resistance is a key factor in the development of diabetes, and reducing insulin resistance is a key focus of successful diabetes treatment. While it is easy to get super focused on food intake and especially carbohydrate intake as the primary treatment for diabetes, to do so without addressing the other components of diabetes is not helpful and is unlikely to lead to desired health improvements long term.

Insulin resistance is treated by proper exercise, weight loss, and sleep habits. Targeting 150 minutes of exercise and a minimum of 7 hours of sleep nightly is a great place to start. Limiting added sugars can also reduce insulin resistance, as can minimizing or reducing stress.

Successful diabetes treatment, including the ability to reverse diabetes altogether for some people, requires attention to all 3 parts of the diabetes fire triangle, not just one leg.

So what should Jane do to treat her diabetes? Here would be some practical tips:

What if Jane finds 50 g is too difficult? Remember the goal is a sustainable approach, so I'd tell her to do what she can. If she is eating 250 g of carbs per day, dropping to 100 or 150 g will make a meaningful dent in her glucose (less fuel for the fire, right?). Better to hit this level most days than to hit 50 g for a week, get frustrated and give up.

As she sees results and grows in confidence, she'll probably reach a point where she is ready to take on more challenges. And with each challenge she takes on and overcomes, no matter how small, she'll be improving her health. And that will allow her to live at her best for herself, her family, her career, or whatever she finds most important in her life. That's the goal.

Learn Diabetes Mastery is currently closed to enrollment. Enter your information below to receive notice about the next open enrollment period (and in the meantime we'll send you some useful tips and resources to help you out).